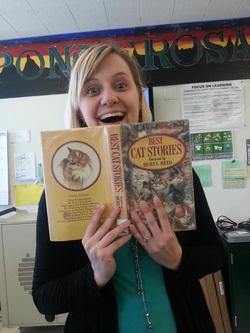 Mrs. Zimny has been the Ponderosa High School librarian since the 2013-2014 school year, and she absolutely loves her job. Previously, she was the drama teacher at Ponderosa from 2004 to 2013, producing 18 main stage shows during that time. Conveniently for her profession, she has always loved to read. When she is not reading, you will see her performing. Singing, acting, and dancing have been passions of hers since she was a small child, and she still continues to be in musicals to this day. Her other passions including technology and how it is integrated into education in order to help students and teachers. Mrs. Zimny holds a BA in Theatre with a minor in English from CSUS, where she graduated in 2003. She received her teaching credential in English from CSUS in 2004 and her Teacher LIbrarian Services credential from Azusa Pacific University in 2014. She is a mother to a beautiful baby girl, Charlotte. Don't be shy to drop by her desk and ask for her help, especially when it comes to which book you should read next!